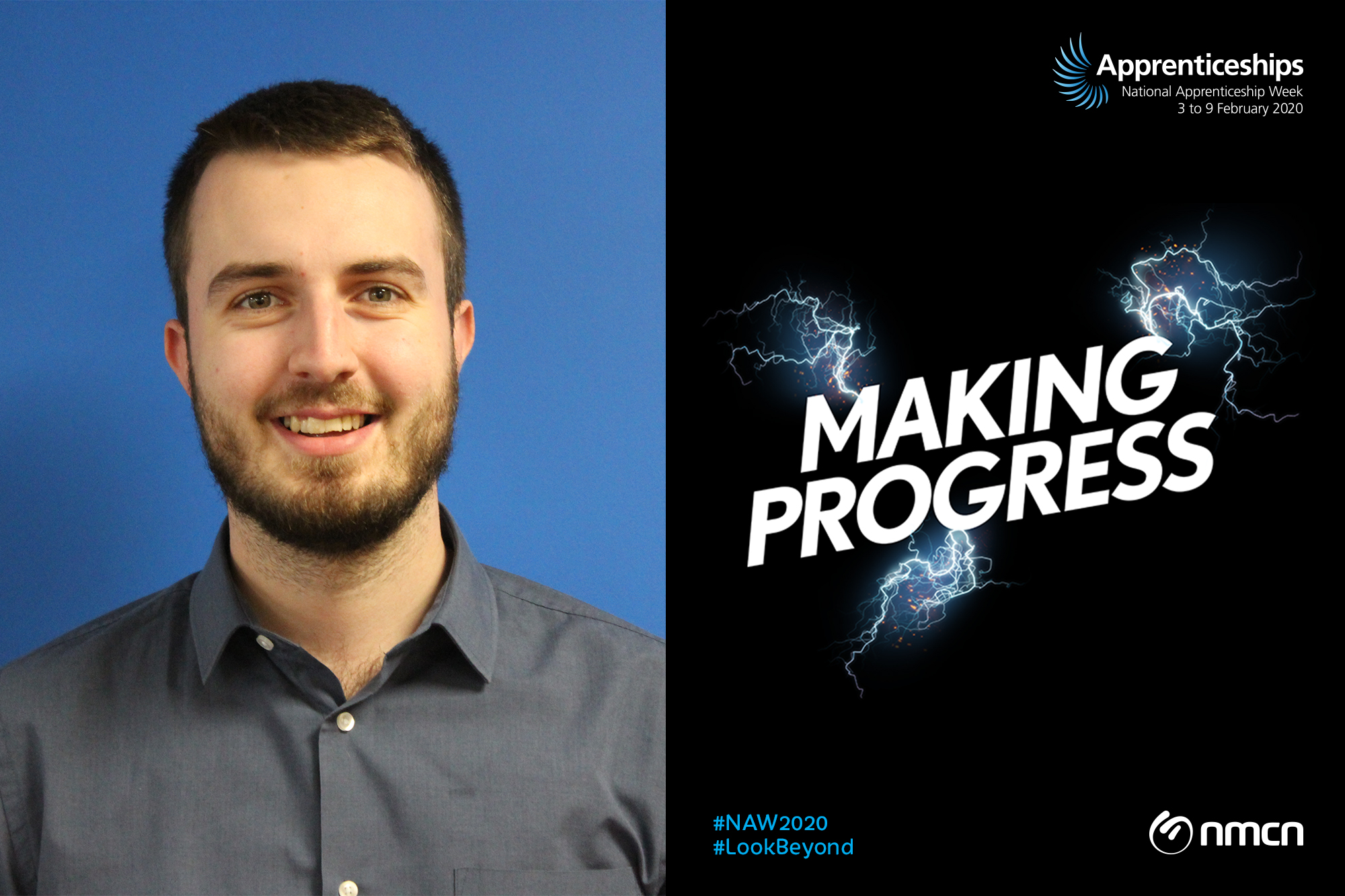 Luke Bishop, IT solutions architect at nmcn, says there is often a misconception that people have to choose between apprenticeships and a university degree.

But after joining nmcn as an apprentice almost 10 years ago, Luke, 25, says he has had the best of both worlds – and is more qualified than most of his contemporaries.

Luke, who left school aged 15, soon after his GCSEs, had little interest in the classroom or learning. But he says his apprenticeship gave him a passion for education he never thought he’d have.

He says the hands-on experience in the workplace not only gave him a passion for his career, but it put his academic career into perspective.

“The apprenticeship has given me hands on experience and taught me about being responsible for myself in the working world.

“But the degree has been important in furthering my knowledge outside of the business. As well as learning areas of ICT we don’t currently need at nmcn, I also did some project management modules which have been really helpful, and I’ve been able to come back and use it in the office.”

Luke, who is dad to two-year-old Luka George and hopes to complete a masters before he is 30, added: “I didn’t think I’d ever do a degree. I messed around at school and couldn’t really focus on anything academic, but my outlook has changed now.  I really respond to it, I just needed to get that bit of experience behind me to give the confidence and the desire to learn more.”

Luke, whose dad Ian worked as a site manager for nmcn, applied for the apprenticeship after his dad spotted an opening for the ICT team on an internal website.

He worked full time in the ICT department, taking time out each week to complete his Btec course.

He said: “I loved it. It was hard work and I had to grow up fast – it definitely wasn’t like school – but I enjoyed it. I was learning and earning money, so I could afford to buy my first car when I was 17 and put a deposit on a house when I was 23. Lots of my friends are coming out of university with huge debts and fighting for jobs.”

While apprentices don’t have to go on to complete a degree, Luke says the hands-on experience gave him the freedom to choose. Luke went on to attain an HNC and HND before studying for his degree part time.

He said: “Not everyone is academic, but that doesn’t mean you’re not a hard worker and not good at the job. Apprenticeships mean you can try out the job first with basic entry-level qualifications and then, if you want to, you can go on to do more.”

Luke, who is now hoping to recruit apprentices to his own team over the next few years, said : “nmcn has been incredibly supportive which I am really grateful for, so I would love to take on apprentices of my own one day and give something back. An apprenticeship is hard work – it’s certainly not the easy route – but it’s worth it!”

Three is the magic number for nmcn

We are delighted to announce that we have received three awards at 2020’s Water Industry Awards. This included ‘Water Industry Contractor of the Year’ award for the third consecutive year. Makin...

As part of our Positive Impact Plan and our commitment to support our communities, we launched a ‘design your own school’ competition. We thought this would be a great way to keep children busy, w...