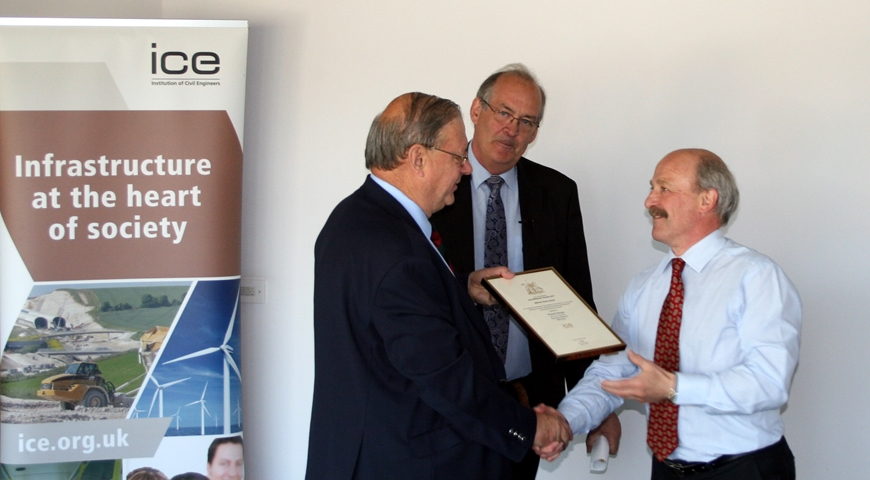 The Institution of Civil Engineers (ICE) East Midlands works to promote and celebrate the outstanding work of members. The William Kemp award is the ICE East Midlands premier award. Each year it is awarded to an individual who has made a sustained and exceptional contribution to civil engineering in the East Midlands over the course of their career.

This year it was presented to our very own Executive Chairman, Robert Moyle. ICE broke with tradition this year and presented Robert with the award at our Head Office in Huthwaite. Robert received the award from William Kemp himself. The award is in recognition of Robert, who is a Fellow of the Institution, and his sustained contribution to the profession in the region for over 40 years, working for the same organisation throughout and having been a driving force behind its success. As Executive Chairman, Robert is instrumental in ensuring that our family values are, and always will be, at the core of our business. nmcn (formerly North Midland Construction( values its people and has invested in its own training academy to help people achieve their potential. On receiving the award, Robert said: “I’m extremely honoured, extremely surprised and utterly delighted to receive this award. I’m absolutely committed and passionate about encouraging young people to come in to the civil engineering profession. It’s a great profession to be in and it’s done me proud over many, many years.” The ICE East Midlands appreciates Roberts support with their work to influence decision makers in the region, and the support that nmcn provides in submitting the work of their teams, very often more than one in each category, for the EMMAs annually.  ICE East Midlands are sure that this celebration of the success of his teams has been at the heart of Robert’s success as an engineer, a businessman and an inspirational leader.  He is more than worthy of receiving this year’s William Kemp Award.

‘When I Grow Up’ Featured in ICE Top Inspiring Books for Children!

The Institution of Civil Engineers (ICE) has recently shared a blog which features  ‘11 inspiring books that teach children about engineering’ - including our very own ‘When I Grow Up’. Ou...