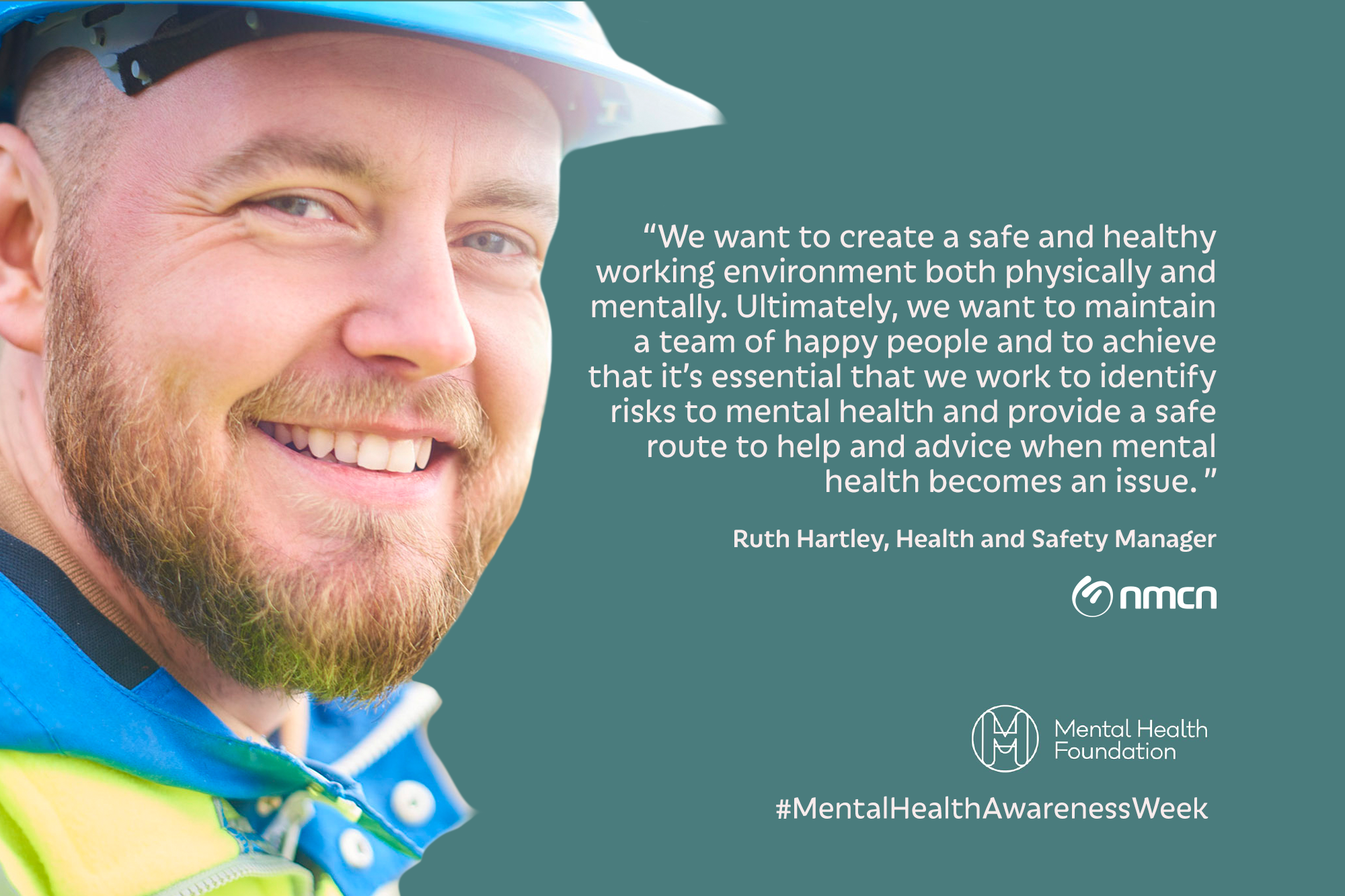 Dr Ruth Hartley: A holistic approach to our people

As part of Mental Health Awareness Week, we’re looking at why looking after our people’s mental health and destigmatising mental illness is vital to the construction industry. nmcn’s Health and Safety Manager Dr Ruth Hartley looks at why we’re taking a holistic approach to health and safety.

Suicide is the leading cause of death in the UK for men under 50, that’s a fact that, as a business operating in a predominantly male industry (despite work to increase numbers of women in construction), is likely to directly impact much of our workforce.

We also know that suicide rates for men in low-skilled construction roles are more than 3.7 times higher than the national average. But the issue isn’t unique to men, good mental health plays a huge part in all our lives and influences our ability to do our jobs. So it makes sense that the mental health of our people should be of utmost concern to any employer, particularly in this industry.

That’s why we’re taking a holistic approach to health and safety – we want to create a safe and healthy working environment both physically and mentally. Ultimately, we want to maintain a team of happy people and to achieve that it’s essential that we work to identify risks to mental health and provide a safe route to help and advice when mental health becomes an issue.

Traditionally, many businesses – not just in the construction industry – have taken a tertiary approach to mental health. This means that they’ve provided support for staff in times of poor mental health. Clearly this is a positive step forward from previous attitudes to mental health in the work place but it does little to prevent mental illness arising in the first place. As an industry we’re very good at bringing in processes and standards to maintain physical health, but the statistics can’t be argued with, we must do more to maintain mental health – not doing so can have disastrous consequences.

Earlier this year we conducted a pilot mental health programme at one of our larger sites to assess risks to mental health and identify and put in place interventions to diminish these risks.

This pilot scheme, which was designed by myself along with Dr Ray Randall at the University of Sheffield, used detailed questionnaires and focus groups to understand the risk level of each of the six HSE Management Standards  or ‘psychological hazards’, namely; high demands; low control; low support; poor relationships; role ambiguity and poorly managed change.

The scheme enabled us to identify specific risk factors so we could put changes in place to overcome these and it also helped us to identify any groups who may have been at immediate increased risk to their mental health – enabling immediate intervention to prevent mental illness where we can.

What we found was that just launching the programme alone started conversations that had previously been thought of as taboo. We know that the construction industry, particularly in on-site environments is one which is perceived as very macho and we also know that there remains a stigma around mental health that prevents so many men – from all walks of life – from talking about it.

What we found from our focus groups on our pilot site was that once that conversation was started the response from colleagues was nothing but supportive. We had lots of people at all different levels approach us for advice in how to support colleagues struggling with their mental health and how to spot a problem. There is a fear of being told to ‘man up’, but in reality our participants wanted to look after and help each other.

As an experienced psychologist Ruth has spent more than 17 years in academic and research roles, primarily working with the construction industry.  She takes a pragmatic approach, which seeks to have a positive impact on people working within nmcn.