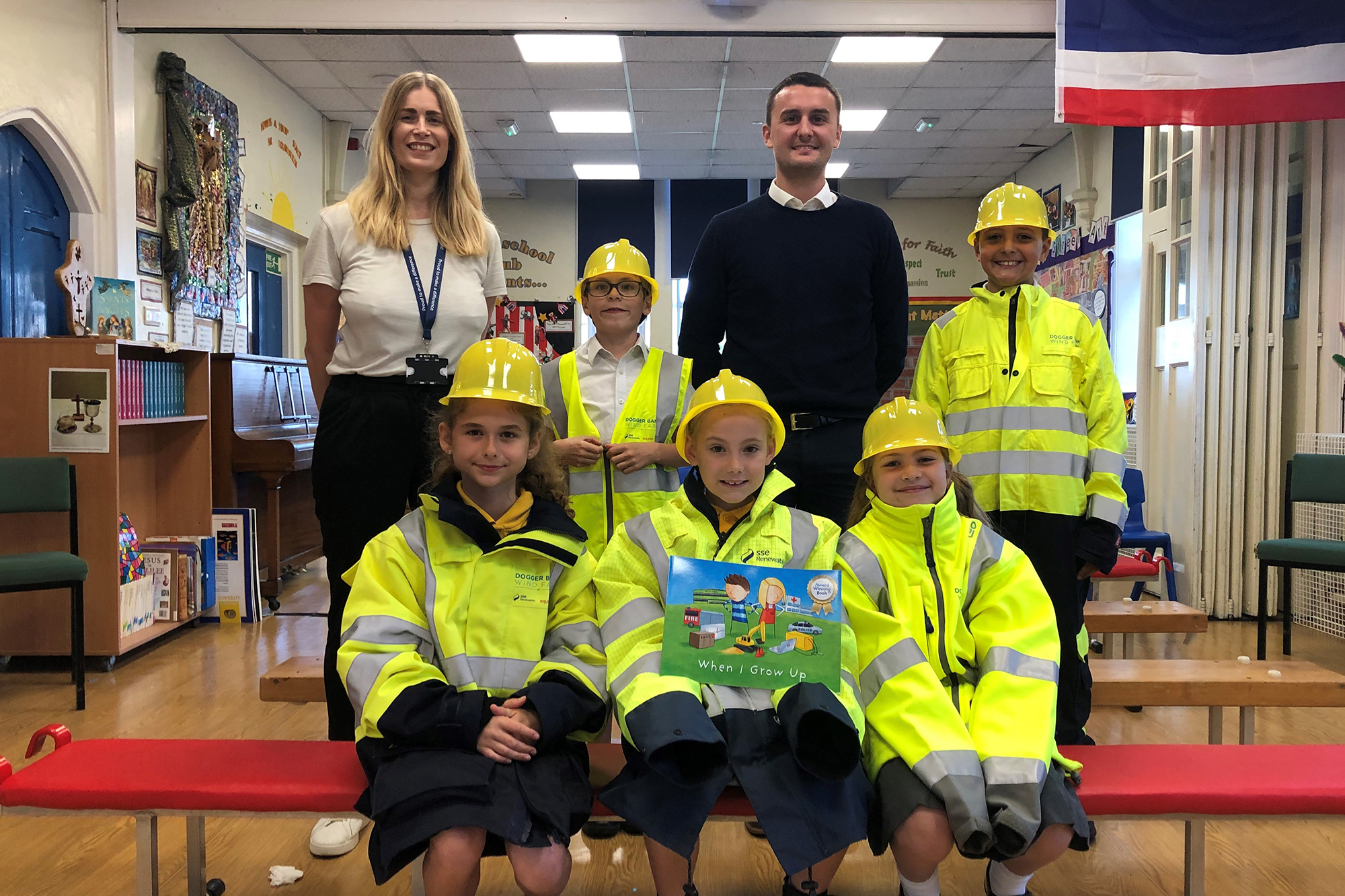 Representatives from the team building the world’s largest offshore wind farm took part in a health promotion event this week to inspire young people at an East Riding primary school.

The week-long series of health-focused events was organised by Woodmansey CE Primary School, with the Dogger Bank team invited along to address the health and safety-related aspects of the offshore wind industry.

A representative from nmcn, a construction firm working on behalf of Dogger Bank’s tier one supplier Hitachi ABB Power Grids, shared exerts from the company’s “When I grow up” career story book. nmcn, which is supporting the construction of the wind farm’s first onshore convertor station, near Beverley, is donating a copy of the award-winning book to every primary school in East Riding. More information about the book is available at https://nmcn.com/news/when-i-grow-up-nmcn-childrens-book/

Woodmansey CE Primary School Head of School, Bethan Nicholls, said: “When we first heard about the role Woodmansey was playing in the installation of the largest offshore wind farm, we knew we had to share this journey with the children. Our annual Health Week provided the perfect platform for Rachel and Chris to come and share the benefits of wind farms and how the children’s very own village was being used.

“STEM is such a vital area of the curriculum and events such as this provide the children with real experience of the industry, hopefully inspiring some of our children to seek future careers within the science, technology, engineering or maths sectors. We are very grateful to Rachel and Chris for their engagement with us.”

Community Engagement Manager for Dogger Bank Wind Farm, Rachel Lawrence, said: “The onshore cable route for the wind farm runs directly underneath the village of Woodmansey, and local children would have seen critical work going on near their school very recently. So it’s been great to have the opportunity to come in and talk to the children about how those cables will eventually transmit renewable energy to millions of UK homes, as well as sharing important health and safety messages from across the green energy sector.

“The children enjoyed trying on some protective clothing and asked some impressive questions about the energy transition.

“It was also great to have the support of nmcn to share their impressive career storybook, which they’re offering to all 124 primary schools in East Riding.”

In June Dogger Bank Wind Farm unveiled plans to invest £1 million in coastal communities during its construction. The programme will put science, technology, engineering and maths (STEM), at the heart of children’s education, helping them prepare for jobs that will be vital to the green economic recovery of the UK. Local community organisations can also apply for grants up to £500 at https://doggerbank.com/about/community/

The East Riding part of the programme was developed in partnership with East Riding of Yorkshire Council, providing opportunities for all 124 primary schools in the county to in increase and expand their STEM provision. The programme will also be rolled out on Teesside where the wind farm’s third phase connects to the National Grid, as well as South Tyneside where the operation and maintenance base will be located.

nmcn Business Development Manager, Chris Withers, said: “The Dogger Bank Wind Farm is a major development which will deliver a number of benefits for both the public and supply chain. Through nmcn’s involvement in the project on behalf of Hitachi ABB Power Grids providing the civil engineering scope, we are also delighted to be able to visit Woodmansey Primary School to provide an insight into the construction industry, deliver health and safety advice and inspire future generations.”

Dogger Bank Wind Farm, which is to be built more than 130km off the Yorkshire coast in the North Sea, is currently being developed in three 1.2GW phases: Dogger Bank A, B and C.

Work on the onshore convertor station for Dogger Bank A began in the summer, at a site off the A1079 between Beverley and Cottingham. The convertor station will take the electricity generated by the wind turbines from the first phase of the wind farm in the North Sea, and convert it from HVDC to HVAC current, before the power passes through the adjacent main substation into the National Grid for distribution to homes and businesses.

Representatives from the team building the world’s largest offshore wind farm took part in a health promotion event this week to inspire young people at an East Riding primary school. The week-lo...