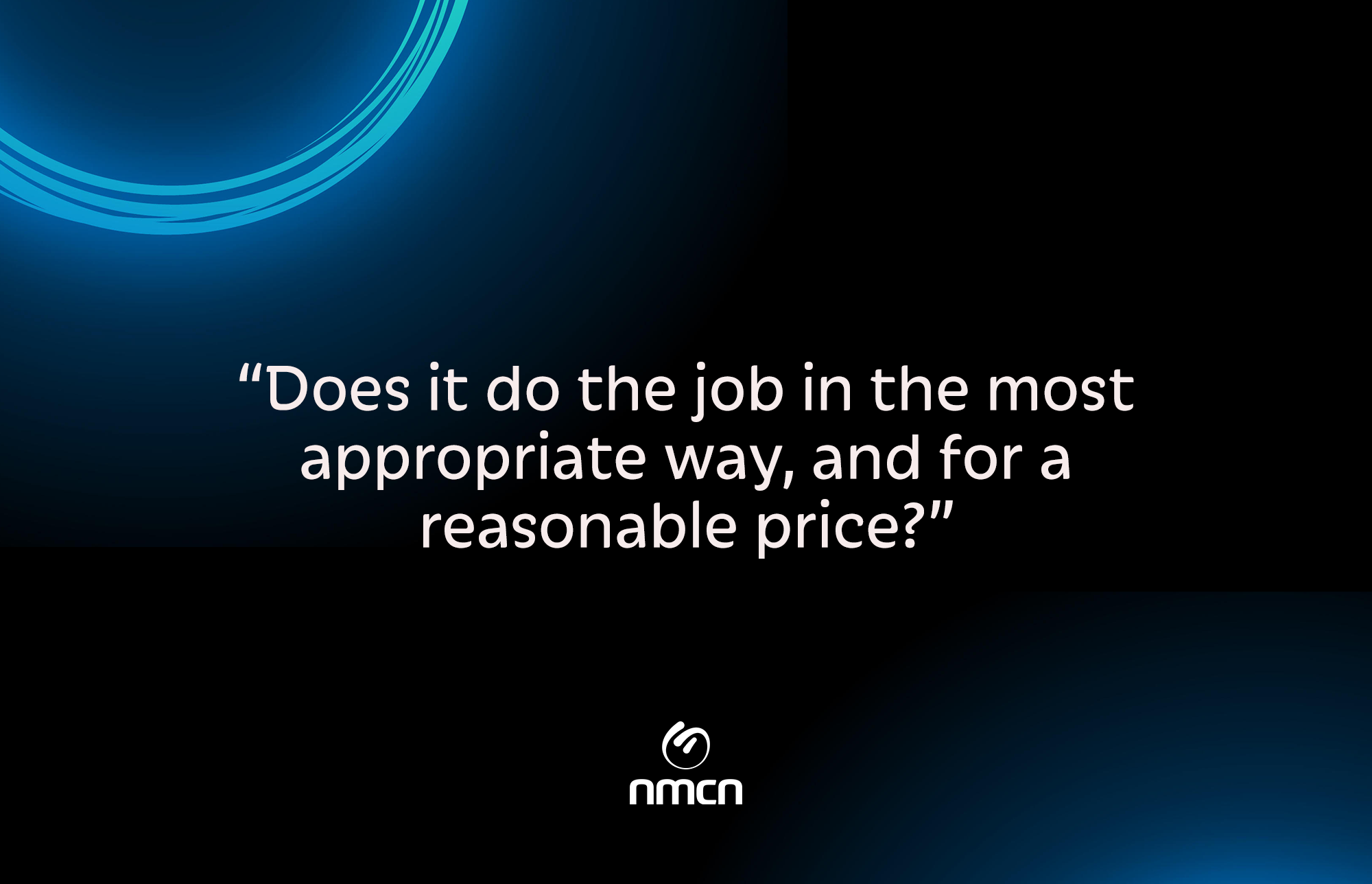 Gary Ross, our Head of Digital Transformation discusses laser scanning, it’s accuracy and selecting the right tool for the job.

Over the years, I’ve been amused and frustrated by many and various trends and technologies that have distracted many, many people from their real jobs. Respected people have made whole career changes based on a new widget, and some have never come back to the world they left.

Our world is one of common sense, the “get it done” attitude and plain and simple application of the best of our ability to make a project as perfect as is possible within the constraints of budget, timescale and quality.

One distracting technology which has stuck with us is laser scanning, partly because it actually delivers good data, and far surpasses the previous methods of measuring and setting out. I welcome this as a big step forward in how we think, a transformation some would say, and something that is sure to benefit the projects we are working on now and those in the future.

What drives me simply nuts however is when competing technologies describe their widget as “more accurate” than others – this in a world where we still think in feet and inches but write in metric.

Yes, the millimetre perfect laser scanners have a place, and as a mechanical engineer I can fully appreciate the accuracy they give when measuring (for example) flange distances for prefabricated parts to sit between.

But there’s the rub isn’t it? The cost and time taken to produce those scans at those accuracies are relevant to the item being scanned. So why do we apply those same high costs and timescales to scan the parts of our world which are frankly far less millimetre sensitive?

This sort of thinking would apply mars lander technology thinking to the average four door saloon, and put the price at half a million for a Ford Focus. We wouldn’t accept that there, so why do we in our working world?

We measure quite happily with tape measures that expand and contract depending on the temperature, and the amount they are stretched across a distance to get a “more accurate” measure (yes I know you’ve done that) and we use those measurements to create plans at 1:50 of that scale, then measure off them to set out a site with tolerances of +/- 100mm in some cases.

Part of it I assume is ignorance to the fact that you’re spending way too much because there simply isn’t a cheaper alternative. But mostly I think is created by (some of) the technology giants, keen to outwit and outspec their competitors and bamboozle the budget holders.

But it goes deeper than that, and for that reason I feel motivated to create this short piece on the Scan Accuracy Myth – or SCAM for short.

Now that you are hopefully more receptive to thinking that you don’t need sub-millimetre accuracy 99.9% of the time, let’s take a closer look at what those impressive accuracy scores actually mean.

According to some completely independent testing by i3mainz, the Institute for Spatial Information and Surveying Technology based in the University of Applied Sciences, Mainz, Germany and a paper written by Wolfgang Boehler and Andreas Marbs – the published accuracies only give a fraction of the truth.

Horizontal accuracy (the distance measured horizontally along the X or Y axis)  is normally different to the vertical accuracy (measured along the Z axis). The accuracy results reported also tend to be “distance from the scanner to the object” distances, rather than the size of the object being scanned, which is less accurate in most cases.

This can be for a number of reasons, but mostly due to edge inaccuracies. Scanners don’t find the edges of an object, they simply fire points at it and when the object is traced over in a modeling tool, the operator can only work with what they have. In every case, the best you get is a zig zag effect, rather than a straight line as shown below: 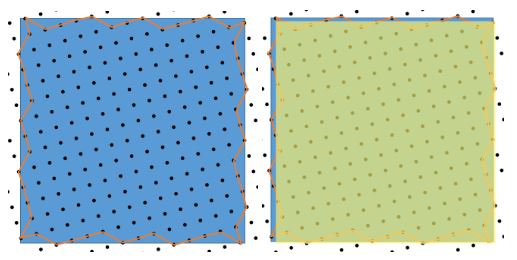 What the example above shows best is that no matter how accurate your scanner is, it’s down to a human factor to best guess the size and position of the object, based on the scan data. Coloured scans make this easier to do, as black and white scanes can make it very hard to distinguish between two objects side by side.

A very well kept secret amongst scanner manufacturers is the ability of the colour of an object to make it seem further away or closer. A typical orange traffic cone for example, can give differences in measurements of up 100mm for the orange parts compared to the white parts.  This is an extreme example, but other colour differences and reflectivity of the items etc can have similar effects on accuracy – none of which are openly discussed in accuracy reports. This I am sure will improve with colour scans, but it makes you think doesn’t it?

As can be seen above, the actual location of the points that fall on an object and even the size of the points themselves can have an effect on “accuracy” of the scan – let alone the modellers ability to understand where edges are.

Whilst the manufacturers will do their best (and they vary widely) to get the scan points accurately placed and small enough to be useful through focussing, in reality the first time you bump your scanner, hit a pothole or even worse drop it, the calibration can be seriously affected – especially if it was not robustly made in the first place.

It would also appear that the “we are accurate to +/- 1mm over 100m” claim is usually based on extrapolation from a much closer range. This makes sense if you think about it, because how do you accurately measure something’s accuracy over 100m if there is no more accurate way of measuring that distance (see tape measures above).

In my mind, I would prefer my own common sense to prevail when making choices on technologies such as these. Just because it is possible, do we actually need it? Am I willing to pay for a mars lander when I need a ford focus? If I can’t be bothered to get within 100m metres of something, am I really that fussed about it being millimetre accurate?  If I am concerned about the accuracy to that level, would it not be frugal to get up close and measure it properly?

If there was a way to scan things 10 times cheaper and in one eighth of the time – with a suitable level of accuracy, would that not be the right approach? – the Ford Focus approach as I now call it.

Technology is best used and is most efficient when the problem suits the technology, and not the other way round. Are we paying too much for laser scanning? I think so. A sledgehammer to crack a nut resonates with me.

Recently we did a case study using a less accurate mobile scanner (Published accuracy +/- 3cm) to scan farm buildings. We used a mobile scanner, and a professional scanning team was on site at the same time using tripod based scanners. In brief, what took four guys two days to scan, took us two hours, and when we overlaid the two sets of drawings created, there was 39mm difference over the entire site which spanned 57m. Our costs for the scanning worked out to £200 whereas the professional team worked out to around £2000.  In my mind, the inaccuracies of modelling over the point cloud could have caused the 39mm difference on either drawing, and as such the scanner technology was neither here nor there.

What we did see however was a much reduced cost and time – scanning at a time to suit ourselves and a much quicker path to getting a drawing/model done.

Next time you see an accuracy claim, no matter how impressive it is, please reflect on those issues raised above. Test the accuracy yourselves in a demo, and don’t listen to anyone who says that theirs is better. The key question for me would be – does it do the job in the most appropriate way, and for a reasonable price? If not, then walk (100 metres accurately measured +/- 1mm) away.